Judge Robert W. Rettich, III has lived in our community his entire life. Married for forty-three (43) years to his wife Kathy, together they have raised their four (4) Children, Rachael Acacia Rettich, Robert Rettich, Abra Ann Reed (Rettich), and Kathryn Alyse Rettich. Judge Rettich graduated from Valley View High School in 1971, and obtained his B.A. in Political Science from Miami University Oxford in 1975. He obtained his Juris Doctorate from University of Dayton, School of Law, and was admitted to practice in 1978.

Prior to his election as Miamisburg Municipal Court Judge, Robert Rettich managed a successful private law practice over three (3) decades, during which time he accumulated a vast amount of trial experience. During his career, Judge Rettich served as city, village, acting and special prosecutor for multiple area courts, served as an arbitrator for Montgomery County Common Pleas Court, and served as the Law Director for the Village of Farmersville for more than twenty (20) years.

Judge Rettich received the endorsement of the Montgomery County Republican Party in 2011, and began his term on January, 1 2012. A ceremony was held for the Judge's swearing in ceremony at the Miamisburg Civic Center, on December 30, 2011. Attending the ceremony was an overflow of guests who wanted to share the occasion with the new Judge and his family.

The Judge spends his time outside of the courtroom with his supportive family. He also regularly attends neighborhood watch meetings, speaks at area D.A.R.E. graduations, and stays involved in multiple charitable programs. To relax Robert Rettich enjoys reading, sailing, and swimming.

Throughout his career, Judge Rettich has always encouraged substance abuse treatment, and other behavioral educational programs, as opposed to incarceration, when appropriate. He is a strong advocate of intervention, and always eager to help people become more knowledgeable about the law and live within the confines of it. Judge Rettich is dedicated to keeping our citizens safe, and managing a court that is efficient, effective, and provides quality support for our community. 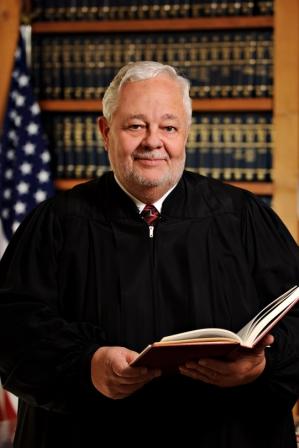